The creator of TINTIN Georges Remi  was born in Brussels Belgium 1907
Georges Remi was not a stand out student rather he would indulge in adventurgame on the street of Brussels. On higher secondary class he joined the boys scouts his Drawing skills caught the attention of is scout teacher and soon he was busy illustrating for scouts magazine and created his first character Totor. 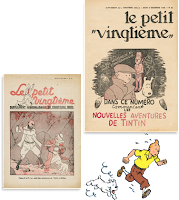 Georges left school at the age of 17 and opted pen name “Hergé,” and started working for children’s page on a local news paper Le Vingtième Siècle. Tintin inspired by  scout boy Totor came out in 1929 it was an instant hit by the time of 1950 it has raveled all around the world but herge stayed in Belgium ..he established his own studio.And here with his team of assistant artists he started expand the TINTIN Adventure across all the horizon.

Hergé’s had become a great sensation his story was based on current political scenario of that time. He took his readers to all around the world as TINTIN adventure was about traveling different places around the globe from Japanese-occupied China in The Blue Lotus to the Arctic Ocean in The Shooting Star.
The Black Island takes Tintin and his canine companion to a foreboding island off the coast of Scotland. A mythical beast — based partly on the Scottish Loch Ness monster — haunts the island, and Tintin is  determined to get to the bottom of the local legend, once and for all.

Chris Rayment
Is it just me or does anyone else find the new Tin Tin movie disappointing?
A great adventure story told in true Spielberg fashion but for me the use of Motion Capture was a misconception. OK, you can't fault such technology but Mo Cao ia ear better utilised in the gaming sector.
The Tin Tin purist will not be happy as the film deviates from its comic book roots - Trad 2D anim would have suited it better but this was never an option for Spielberg. It wouldn't have worked as a 3D movie either.
I would have preferred to tp have seen it as a live action film laden with CGI and V/FX How could Peter Jackson not see this as well? It worked fantastically well for him in the Lord of the Rings Trilogy
No doubt Tin Tin will do well at the box office and so we will see more use of Mo cap- remember how Stereoscopic 3D went ballistic after Avatar.
Yet again we can expect the overuse of technology for technologies sake . . . . .Ho Hum such is life.

Nilanjan Roy Chowdhury but the movie is so.. so.. it is made particularly for the children in India.

Shibaji Dey I miss the test of animation in it. i cant compare it with UP.But Tintin is tintin above all in its uniqueness .

Abhishek Nitish Yes we can ...or rather should say, we have to expect the overuse of technology specially wen it is introduced by big players doesn't matter these are introduced in big budget way... these are actually money making techniques and lots of small players will go for it... i agree with you but but our agree-ment is motivated by our love for goodolddays theory which is not going to be viable commercially i guess.

Debabrata Chakraborty i agree with u sir but the thng is that 2much techno is not good...evrythng shud have some limit..

Jaybrata Bhattacharyya agree, either 2D or live action with VFX would have been the right choice. Mo capture made the whole thing look like crap, they should have learned it from polar express.

Roland Emmerich's new Adventurer Anonymous where a virtual London was to be created, a London  prior to the Great Fire of 1666. for this they build thousand of buildings from a technology called OGEL. This enormous VEX challenge was taken by Volker Engel and Marc Weigert.

We went several times to England to shoot buildings for textures and photogrammetry that were left over from the 16th century," Weigert suggests. "We basically went everywhere from the Scottish border in Wales all the way down to the south and found every little village that we could use for assets to build the city." (excerpts from AWN).

They worked regularly in 3ds Max with both hand and automated work.

"We had more than 300 shots and a second unit team that shot a few back plates in England, but only a few of those were used," adds Weigert."It was all shot in Germany, using both interior and exterior greenscreens. We had entire sequences of 50 to 60 shots where it was just the actors walking or riding in front of greenscreens on stage, and we would build the entire environment for it, which was also accurate. When we were looking at old British films, even up to a few years ago, they were always shot on the same locations with the permission of the Heritage Trust. We didn't want to do that. We wanted to use visual effects to create history as it was, so we built the White Hall Palace, for instance, which was Queen Elizabeth's home. It doesn't exist anymore and is in a totally different place and looks totally different. But we built it accurate to old paintings. 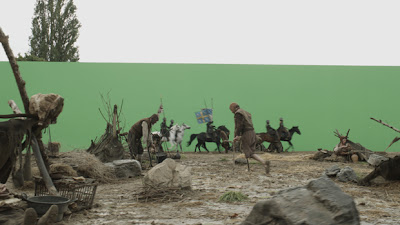 "When you do something in 3D, you can never see it in real time," Weigert suggests. "You have to wait for the picture to render, then you have to wait for all the frames to render to then put it into comp and then to see the results. So we tried to move away from that and do as much as we could with projection techniques in Fusion, which was the software of choice for this project. And we together worked with eyeon to develop new tools, one of which was full 3D water as a compositing package inside Fusion, so we had almost real time feedback on our water of the River Thames; we did 3D backgrounds with projected images must faster. For instance, we'd only render a still frame in the 3D package and then re-projected that in Fusion. And we'd use that and add camera moves.
"We wanted those shots to look as real and as immersive as possible. Roland likes to create these shots to put things in perspective and guide you and give you a sense of scale." (excerpts from AWN)