Breaking Into The Industry is a weekly interview series that speaks with video game professionals from all across EA. We hope that by sharing how some of the industry’s biggest (and smallest) players got their start, you can learn how to do the same.

What’s your name and job title?
Berjes Enriquez, Lead Development Director.
And what does a Lead Development Director do?
It has really varied over the years, going from managing art teams, to managing the entire art discipline, to managing engineering disciplines, to helping the entire team hit deadlines and achieve their goals while assessing risks and helping inform decision making throughout the team.
The best part of it has been the people I’ve managed. They make me want to come in to work.
So you literally direct the development of a project.
Well, I would be a little cautious about using the word “direct.” I’m not an expert in the field of Animation, or Gameplay Engineering, or User Interface, so I rely on the leads of those disciplines to make the best decisions for the project. In this sense, they are directing their disciplines. I’m just there to help that process and to make sure there’s nothing preventing them from doing their jobs.
Which part of EA do you work with?
The Sims.

I know you can't discuss what you're working on right now, but can you tell me more about what you do?
Sure! Let's talk about pre-production first. So in pre-pro, the concentration is trying to drill down on a great design that we can deliver on. It’s also a great time to give people opportunities to stretch and explore other areas they might be interested in. For example, an engineer trying design, or an artist trying some project management.
What does a typical day look like for you?
In pre-production? It’s a mixture of making sure that design and production have what they need, so they can lock down a design for the next project; closing out projects that are in their final stages; getting folks growth opportunities in areas that interest them; and a whole lot of other things, but I’ll spare you the details.
Could you also describe the production stage, and how your role changes then?
In production, the concentration is on delivering against the vision, so my role becomes that of a supporter. Everyone sees the vision, and I help them get roadblocks out of their way. At the same time, I try to make sure we’re looking ahead.
Being able to keep the future “us” in mind as we work, be it two weeks, one month, or even one solution down the road, is something we tend to forget to do when we’re focused on the next milestone. Luckily, many people I work with share this philosophy. The Sims environment has always been great at maintaining its culture. The more people that embrace that culture, the less work I actually do. That opens me up to take more off my manager, which opens him up to make more off his manager, etc., etc.
How did you get your start in the industry?
My friend was in QA (he’s also a Development Director now, by the way) and asked me if I wanted to help him. I told him I wanted out of the video game industry, but he asked me to try it for a few months. I’ve been with The Sims ever since. There are at least 14 people from that QA team that are now on the Development team, and it’s The Sims culture that keeps me coming back for more.
What games have you worked on so far?
At EA? Every The Sims game since The Sims 2. Well, maybe that’s overstating it, but it’s much easier than listing them all out. So let’s say… minus two to four titles. PC, not console.
Wow. That’s a lot of The Sims.
Yeah, I’d hate to update my resume. The list alone would take up a page!
So, did you study something in college that helps you in your current role?
[Laughs] That depends on who you ask. I have a psychology degree, so while I don’t feel that relates to games at all, I’ve heard that it helps me manage people.
That said, I don’t think I’m psychologizing people. …Yes, psychologizing. I’m making it a word.
What advice do you have for someone in college who wants a job like yours?
A lot of success in the video game industry depends on work ethic. Whatever trade interests you – be it art, animation, engineering, design, etc. – your work ethic is paramount. Now, I’m not saying ungodly hours on ungodly days. It’s more about the pursuit to constantly improve, reflect, and shoot for quality and efficiency.
Going back a little, you said you started in QA, right?
Correct.
Would you recommend that as a first step for people who want to get into the industry?
That’s tricky. There are a lot of factors that come into play. I’ll say this, though: in my experience, it is the easiest position to get, but one of the hardest positions to get out of. This is when work ethic really comes into play.
There are those who just sit and absorb hours and paychecks, and there are those who really show interest in the project and have the ability to deliver high quality work. That’s the trick, really. QA doesn’t have “hard deliverables.” They have the very open objective of “find every bug in the game.” So work ethic really helps people stand out. The biggest impact you can make is for your work ethic to have a positive influence which helps improve the entire department.
Is there a more ideal way to get into a Development Director role?
The first step would be to get project management experience.
Are you a gamer?
I am. I’m a big, huge fighting game fan. Right now I’m playing Street Fighter IV and Marvel vs. Capcom 3.
I’m also a big comic book fan, but my brother came over to my house and stole Batman: Arkham City before I could play it. He left a copy of Captain America in its place and said I had to play that before I could play Batman. No surprise, as my brother was a producer on Captain America!
Any parting advice for our readers?
Always be aware of your strengths and weaknesses. Then, improve on both. 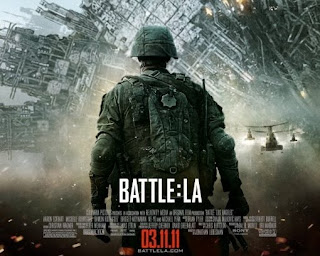 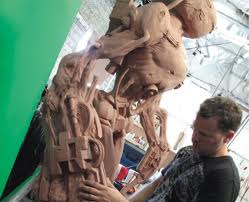 Liebesman’s first big budget venture is almost a war movie with slight odd twist coz this is a war against …yah.. “Aliens” the outer world species came to destroyed ours. Jonathan Liebesman intended the film to be like a war film, and the complete film is shoot in hand held camera style remember united 93. The actors went through three weeks of boot camp, in order to learn how to realistically operate as a marine platoon. 90% of the alien are computer generated but the explosion and effects were mostly real though green screen and Roto were used.
The movie starts with Santa Monica Airport used as a base camp of us Marines. Michael Nantz (Aaron Eckhart), a 20-year veteran who lost his squad during his last deployment in Iraq. And he was planning to retire, but must replace the platoon sergeant from Echo Company, Marines. Under command of 2ndLt. William Martinez (Ramón Rodríguez), who graduated from The Basic School one month earlier. Platoon as to conduct a rescue mission for civilians at LAPD police station where civilians are hidden. 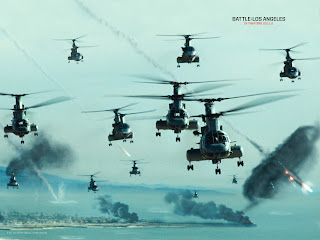 The complete movie is filled with cutting edge excitement with perfectly crafted Action with sear exciting plot and screen play. Though the critical response for the movie was that, special effects are good but script is quiet clichéd. Roger Ebert panned Battle: Los Angeles in a lengthy review, calling the movie "noisy, violent, ugly and stupid", giving the film a mere half star rating. Though he praised Aaron Eckhart's performance, Ebert heavily criticized the film's writing; responses by critiques in sites like Rotten Tomatoes were also not good. Though I enjoyed the movie personally. And I’ll suggest you guys to watch it!, you will love it! And for your information, a first person shooting game is already been released developed by Live Action Studios. Eeeeooo!! Battle: Los Angeles  has already done a business of 200million$ till now, world over. And more than 80 million$ in us alone.
By N.ABHISHEK - December 01, 2011 No comments: